How to Say Handsome in Thai

Want to know how to tell someone they are handsome in Thai?  Just like in English, the word handsome is used when referring to a man and a different word is used to call a woman beautiful (the Thai word for cute is a bit more versatile and can be used for both sexes, animals and more).

In today’s lesson we’re going to teach you how to say handsome in Thai. 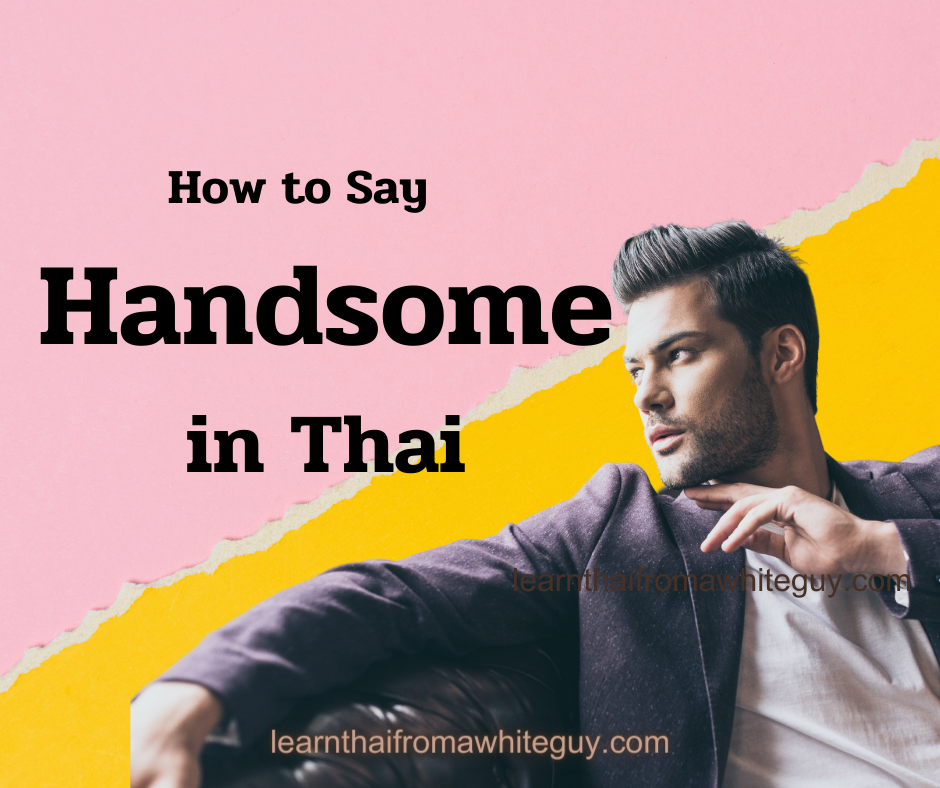 If you’re looking for the quick answer.  The Thai word for handsome is

This is a handy word to know in Thailand as it’s common to comment on whether a man is handsome or a woman is beautiful.

Thai Culture Tip: When you speak with Thai people you might find that they speak more directly about physical appearance than Westerners are used to – or comfortable with.  For example, it’s not uncommon for a Thai person to tell a friend that they look like they’ve put on weight.  It’s usually not meant, or taken as an insult.

How To Say “You’re Handsome” in Thai

If you search Google or look in your Thai language phrasebook, it’s likely that you will see “you’re handsome” translated as:

Thai people will often refer to each other based on how old the person they are talking to is in relation to them.  The Thai language has a built-in friendliness and/or respect so Thais will address family, friends, colleagues and strangers as auntie, older brother, little sister etc based on your relationship with them.  The most common pronouns that you will probably hear are พี่ (pii) and น้อง (nawg).

So if you want to tell someone who is older than you that they are handsome you can say:

Here are some other sentences where the verb “to be” is not used:

How To Say “He’s Handsome”

If you’re talking with your Thai friend and you’re telling them about the handsome guy from work, you might want to say the phrase “he’s handsome” in Thai.  In order to say this, you need to use the word เขา (khao) – “he” (also used for “she”).  The official spelling of this word would give it a rising tone but when spoken in everyday Thai sentences it is usually pronounced with a high tone เค้า (khao).  Because of this, you’ll often see the colloquial spelling when you encounter this word on the internet, chat and social media.

Or if you see a handsome guy while you’re at the bar you can point to him and tell your friend:

If you’ve seen a really attractive guy and you want to add emphasis then you can add one of these words to your sentence:

You can show your love for your significant other by referring to them with this very sweet phrase:

Now that you know how to say handsome in Thai, you can run out and start telling every guy you see that they are หล่อ (lawh).