How To Say The Months In Thai

Learning the months of the year in Thai is a great way to increase your vocabulary when learning Thai.  Just like the days of the week in Thai, you might find that Thai months often come up in day to day conversations like “I’m going on holiday in June”. 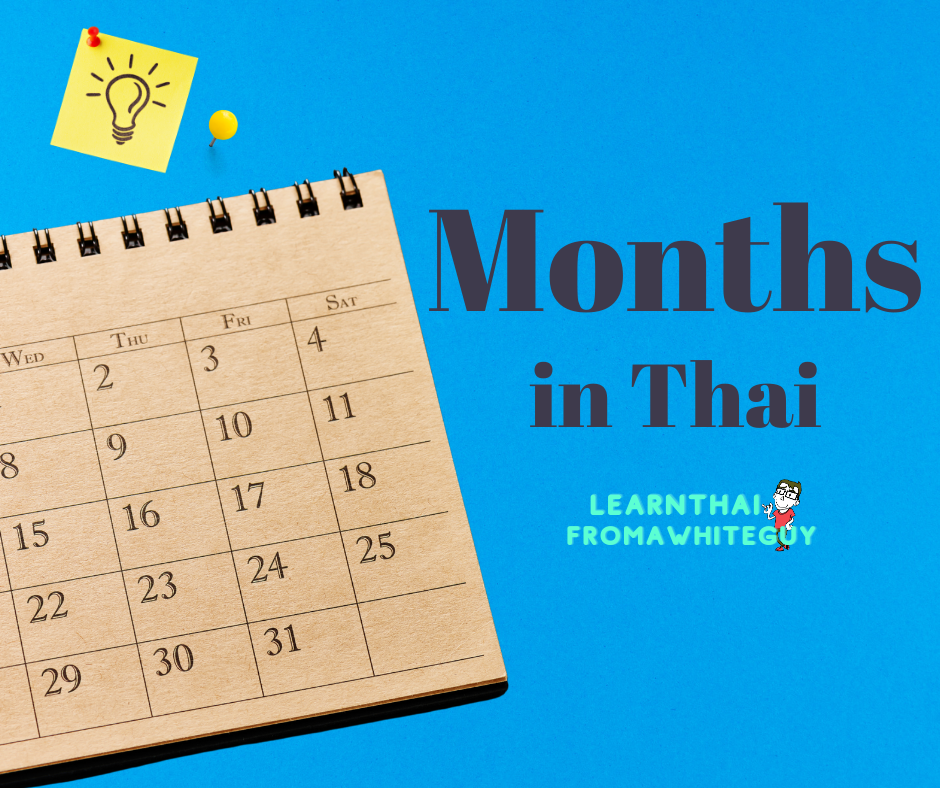 It may require a bit of brute force to get all the months into your head as some of the month names are quite long and not related to anything else a beginner is likely to encounter.  You will remember them faster if you can associate each month with important or meaningful events for example “my birthday is in September” or “Christmas is in December.”  Just spend a few minutes a day on these until you get them.  Come back anytime and use the flashcards towards the end of the lesson to help you review.

*In colloquial speech, you can drop the last syllable of each month.

These 12 flashcards are for the colloquial, spoken version of the Thai months.  That means we’ve left off the last syllable.  It’s easier to learn the main part of each word first.  After you know these, it’s easy to add on the last syllable if you know how many days are in each month.

In formal documents, it’s usually alright to write the abbreviation (see table below), but

How To Say The Thai Months

Notice that the months end with either – คม (khom) or – ยน (yon) with the exception of February which ends with พันธ์ (pan).

It’s always good to remember the full version but if you can’t remember which month ends with – คม (khom) or – ยน (yon), don’t panic as the endings are often dropped in everyday speech.

The abbreviations are for written Thai only.  If you read the newspaper in Thai then you might see the abbreviated version of the month, but if you were to read it out loud, you would still say the full version.

How To Say The Date in Thai

To be able to say dates in Thai you’re going to need to be confident with Thai numbers first.

To say ordinal numbers in Thai (first, second, third etc) you just need to add ที่ (tee) before the number.

Now to say the date you just add the Thai word for “day” – วัน (wan) before ที่ (tee) and combine them together to make:

So the structure for saying the date is:

How to Ask the Date in Thai:

Let’s look at some examples:

Last Month, This Month, Next Month

Sometimes you might want to say “last month”, “this month”, “next month” in Thai.  The way to say this is:

Let’s look at some example sentences with these words:

Months and Months – How They Came To Be

All of the months in Thai are named after the signs of the zodiac.  Like many words in Thai, the names of the months are derived from Sanskrit.  For example the Thai word for January – มกราคม(mok kka raa khom) comes from the Sanskrit word มกร (ma kka ra) meaning “sea monster”.  In Thai, the word for Capricorn is ราศีมังกร(raa see mang kkon).

Well done!  Now you know how to say all of the months of the year in Thai.  Remember the best way to memorize each month is to associate it with an important event.  And the most important thing is to get out there and practice what we’ve just learned in real life.