Learn Thai from a

Learning to read Thai is the most important step you will be taking on your journey to learn Thai. This course is going to attempt to help familiarise you with how the Thai script works and give you actual examples of very common words and phrases even before you know how to read. This will be especially useful for people who are skeptical about learning to read. It does generally take a couple weeks to get the system into your head and a month or 2 to master, but the payoff will be enormous and you’ll understand within a couple hours why you need to know this.

Let’s start with Thai people’s favorite activity and a word you’ll hear every day no matter what part of the country you find yourself in:

Notice how we attach an “aww” vowel after each of the consonant sounds. This happens for every letter.

There are 3 pieces to this puzzle. An initial consonant, a vowel and a final consonant. The vowel is actually the shape above the letter in # 2. In Thai, you will never write a vowel shape by itself. It will always be attached to a letter. In the case of the above example, the vowel happens to appear on top of the letter it’s being attached to. This will not always be the case and the position of the vowel does not affect its pronunciation.

The chicken letter, ก is like a [k] sound, but be careful as it isn’t aspirated like most “k” sounds are in English. Aspirated consonants have a strong blast of air that comes out of your mouth when you pronounce them. Put your hand in front of your mouth and say the following words:

You should have a felt a strong puff of air from the first 3 words and the same from the ending consonant of the final letter. In Thai, the chicken letter ก does not have that strong blast of air. Try saying the a “k” very softly and see if you can stop yourself from sending out the puff of air. Remember to keep your hand in front of your mouth so you can feel the difference. If you feel a strong blast, you are saying it wrong and probably won’t be understood. It may sound like a “g,” but it’s not quite the same and it’s better not to think of it this way. This stuff is more important than the tones so don’t neglect practicing it. Read this more than once.

The อ letter you will see in all the following examples is a special placeholder that has no consonant sound value attached to it. Think of Thai vowel shapes as clothing for consonants. The consonants wear different vowels which give us different sound combinations.

Think about how we say the alphabet in English:

When I say vowels are like clothing, think about the 4 letters above as all “wearing” an “eee” vowel. If you can wrap your head around that, you’re on the right track.

Not all letters take that [eee] vowel sound as that would severely limit the amount of words you could come up with, but hopefully you get the idea. In Thai, we always add an ออ vowel sound [aww] to a consonant when we are referring to it. This is generally called an “inherent vowel,” meaning that if there is no other vowel written, we will use the ออ sound.

Thai words and syllables are generally made up of 2-3 parts. However, some vowel shapes will have multiple parts to them. It’s different and may seem a bit weird at times, but when you are a couple of hours into this course, everything should start to click and you will see how important learning this stuff really is.

Ready to get started? Move on to the first real lesson and get to work! 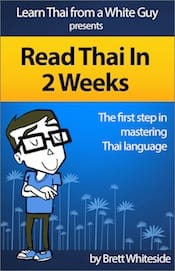