How to Say Good Night in Thai

Below, we’ve covered all the most common ways to say good night.  If you are looking to also learn how to say good morning Thai, check out this post. 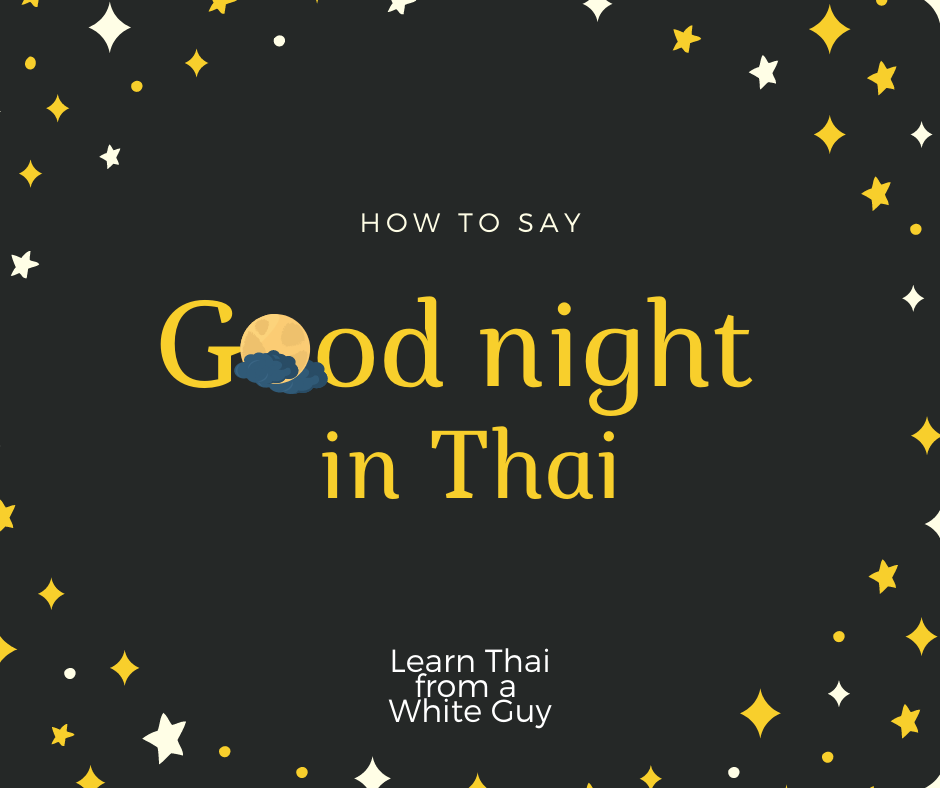 Before we get into all the possible phrases, in case you are just looking for a quick answer, this is the best way to say “good night” in Thai in most situations, both formal and informal.  It might sound familiar.  Read on to find out why.

Thai language borrows many words from English and other languages and a large number of words are used all the time in daily conversation among Thai native speakers.

If you ask a Thai friend how to say “good night” in Thai, they are probably going to tell you this phrase so we need to get it out of the way.  However, the truth is that this is very rarely used in real conversation between Thai people so we don’t recommend using it unless you are trying to be silly.

Because being silly and making people laugh can do great things for helping you remember new words, and it might be worth a couple minutes of your time to learn.  Just keep in mind it’s not really a phrase that will occur naturally. 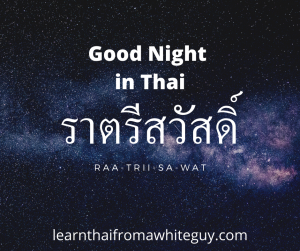 It’s considered formal, but even that isn’t really completely accurate.  A Thai person isn’t likely to use this with their boss or an official.  Phrases like this (and sawatdee!)  were created from Sanskrit words in the 30s and 40s in an attempt to internationalize Thailand.  Some of them caught on (due to government promotion) while others primarily show up in Thai dramas and when translating foreign media.

It’s much more common (even in formal situations) to just use this phrase borrowed from English.  They will be pronounced using the Thai sound system so they may sound strange at first until you get accustomed to Thai pronunciation.

Ir you haven’t yet mastered the Thai script and sound system then it may be a bit tricky to get the pronunciation right.

Informal Good Night in Thai (use with friends)

If you really want to be able to speak Thai fluently, then it’s a good idea to get into the habit of copying what native Thai speakers say rather than translating a set phrase from your native language which may sound strange in Thai.

Here are some phrases for “good night” that Thai people actually use with their friends and family.

And remember, if this seems too complicated, you can always just go with: กู๊ดไนท์(guut nai) – good night

ฝันดีนะ (fan dii na) is a widely used way to say “good night” in Thai and can be used amongst family members, couples and friends alike (although it’s not very common amongst straight male friends as it sounds a bit on the sweet side).

There are also some common ways to say “good night” in Thai which have come from English including the . Let’s have a look. 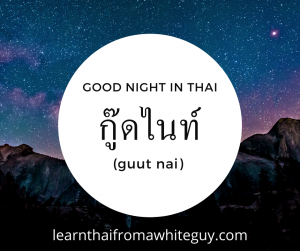 Here’s a few additional Thai words you might want to know.

Enjoyed this post?  Consider checking out our full learn Thai language program which covers all the core skills you need to start speaking and reading Thai.   Sign up below and you’ll receive some free lessons from our online courses.