How to Say What is Your Name in Thai

One of the most important phrases you’ll need to know when you’re meeting new people is asking their name.  Below we will break down everything you need to know about how to say “What’s your name?” in Thai.

How you (should) speak to people in Thai will often depend on a few factors such as your age in relation to theirs, the situation or the person’s status so we’ll cover both the formal/polite and informal sentences you can use when speaking with Thai people.

You can learn the basics of the Thai alphabet and sounds in 10-20 hours study and master it within a couple months of very part-time study.  If you put in an at least an hour a day, you can learn it a lot faster, but finding your own ideal pace is a big part of learning a new skill. 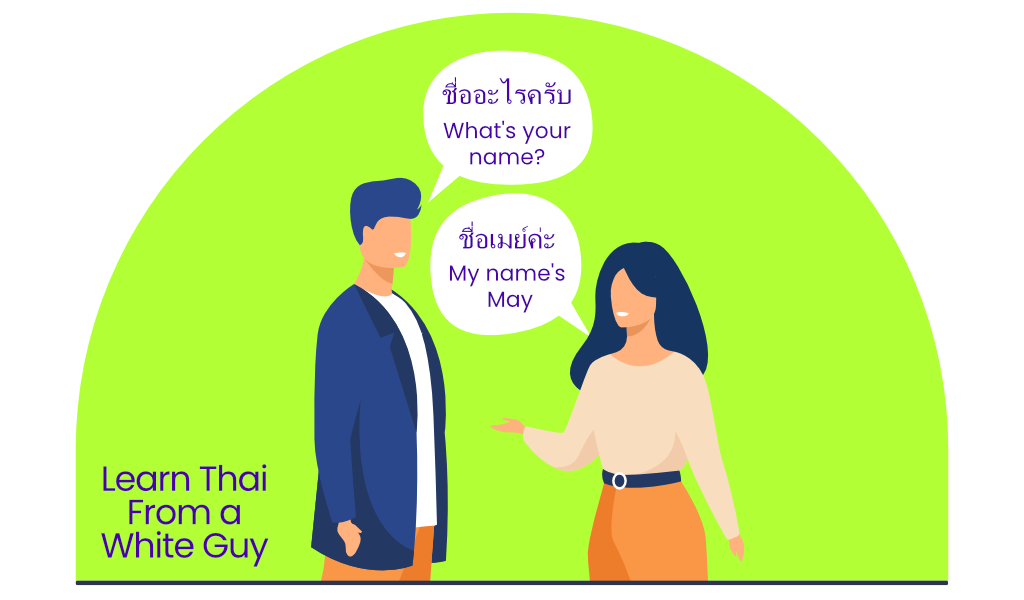 Formal/Polite: How to Say “What is your name?” in Thai

First let’s take a look at the formal way to say ‘what is your name’ in Thai. Thai people might use this in a setting when they are speaking with older people or people who are higher in the social or work hierarchy.  This could be used in the context of a business meeting, for example.

The structure of ‘what is your name’ in Thai looks like this:

Often when we speak to a person in Thai that we don’t know, someone older or someone who has some level of status, we’ll add on the polite gender based particles: ครับ Khrap (male) and ค่ะ Kha (females).

If you are in a formal setting or a situation where you don’t know who you are speaking with yet, such as on the phone, at the immigration office, at a bank or business meeting, it’s probably best to use this formal version of “what is your name?” in Thai.  But for normal social settings, you can use the informal version of ‘what is your name’ which we cover later in this article.

If you are in a formal setting, it is possible that you will be asked the formal version of ‘what is your name’ so it’s important to learn the formal response of ‘my name is…’

The structure of “my name is…” in Thai looks like this:

*When we say “formal” or “polite,” it’s hard to define every possible situation you might encounter, but here are a few good ground rules to follow:

Now that we’ve looked at a few phrases, why don’t you spend 2 or 3 minutes drilling the key Thai words in this lesson?  It’ll make it easier for you to understand the sentences in the rest of this post.

Informal: How to Ask “What is your name?” in Thai

Part of crafting the most natural sentence in Thai language is knowing whether to use a pronoun at all and in situations where they are appropriate, deciding which one to use.

As we’ve seen above, even in formal setting you can drop the pronoun คุณ (khun) entirely and just make sure to add the polite gender-based particle ครับ/ ค่ะ (khrap/kha).

In some social settings you can may hear or want to use to use an informal pronoun.

You eat at a restaurant or a cafe a number of times and start to get to know one or more of the staff at the shop and you’d like to ask their name*.  Since you are a customer, they may use the polite word for “you,” คุณ (khun) + your name to address you.  If they are clearly younger than you, you can refer to them as น้อง (nawng) which means “younger sibling.”

* In most cases, when you ask a Thai person their name, they will give you their nickname.  Thai names tend to be quite long and are rarely used informally.

**Check out our posts on ordering beer or coffee to learn more about this very important sentence pattern.

Thai has a lot of pronouns and I don’t recommend trying to learn them all at once.  The easy answer in all situations is to use คุณ (khun) which is the polite way to say “you” in Thai.  However, it’s rarely the best or most natural answer.   Thai culture has a built-in friendliness/closeness within a status-based hierarchy.

The pronoun you use is at least partially determined by your age in relation to the other person.  So your friend who is 1 week older than you is your พี่ (pii).  If you had a twin brother/sister that was born 5 minutes before you, they are also your พี่ (pii) as they are a bit older.  You can use this word up to approximately the age of your parents.

Although these terms are somewhat informal (a student wouldn’t refer to their teacher as พี่ (pii) for example), it is still perfectly polite and respectful to use these terms in most every day social situations as it displays a level of friendliness and familiarity which is a natural part of Thai culture.

You shop at a market, or a food stall you can use these terms if the food seller is considerably older than you.  There isn’t a set age difference, but think in terms of your parent’s age.  If you are 25-35 and the food seller is 50 or 70, you should use the terms for “aunt” or “uncle” in Thai.

In these situations, can just refer to them as “aunt” or “uncle,” and it isn’t necessary or unfriendly to not ask their name.

Now that you know how to ask ‘what is your name?’ in Thai for almost every situation you will find yourself in, it’s time to get out there and start making some friends. You will be sure to impress your new found Thai friends and make a great first impression.  Looking for more basic Thai language content?  I’d recommend learning all the different ways to greet people in Thai with this post on saying hello.   Looking for Thai language tutors?  Check out iTalki.

Or maybe you are looking to get conversational or fluent in Thai?  If so, check out my Thai core skills program: the Learn Thai Inner Circle

*While we have added transliteration (and AUDIO!) to the Thai words and phrases in the above Thai lesson, if you would like to be able to speak Thai conversationally (or fluently!) at some point, we strongly recommend that you learn to read the Thai script.   It can appear intimidating, but being able to separate the sounds of Thai from English (and/or your own native language) will make going deep into Thai language much easier.