How to Say Happy New Year in Thai

Did you make a New Year’s resolution to improve your Thai language skills?  Or maybe you are planning on travelling to Thailand for the New Year and want to learn how to say “Happy New Year”?

In Thailand there are actually two New Year’s Days which are celebrated, Jan 1st as well as Songkran สงกรานต์ (song kkraan), which is the Thai New Year based on the Buddhist calendar.  It’s also the world famous nationwide water-fight that I can say from many years of experience is super fun.

The “Happy New Year” in Thai that we will learn in this lesson is used for both holidays. 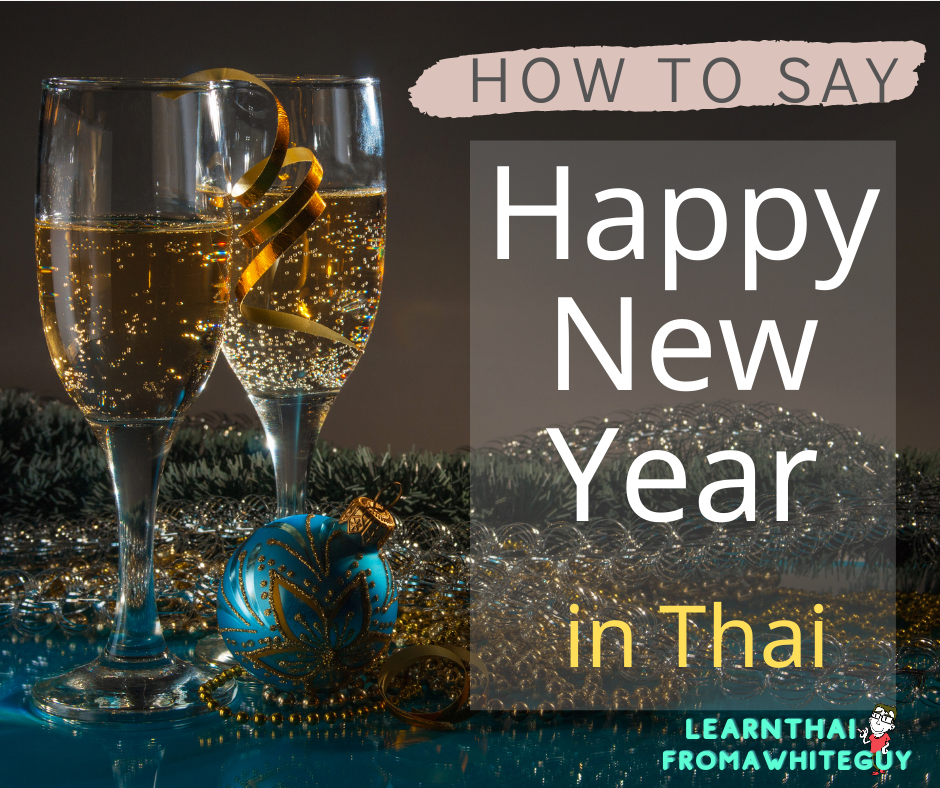 The most common way to say Happy New Year In Thai is:

You may recognize the first part – สวัสดี (sawad dee) – as this is the standard Thai greeting.

The next part is ปีใหม่ (ppee mai) which just translates as “New Year”.

This can be used universally with family, friends or passing strangers on the street.

Another way to say “Happy New Year” in Thai is:

สุขสันต์ (suk san) can be used for other celebrations where you want to wish someone happiness or send them your blessings.  It works a bit like “happy” or “merry” do in English.

The English version of Happy New Year may also be used amongst friends and family.  Just remember to say it with a Thai accent if you want to sound authentic.

If you’re a fan of bad jokes (we are) then you can switch the word เยียร์ (yee-ah) for the similar sounding เมีย (mee-ah).  This is the Thai word for “wife”.  So this sentence ends up sounding like “happy new wife” or “congratulations on your new wife”.  It might be fun to use this with your Thai friends (or your girlfriend!) and watch the reactions it gets (probably a combination of groans and face-palms).

Thai people like to use the English version for other kinds of greetings too.

When you want to wish someone something the structure is:

Thai Grammar Tip: Notice that there are no pronouns in this sentence.  In Thai, it’s common to drop pronouns when it’s obvious from the context who the target of the sentence is.

Thai Script Tip: The Thai symbol ๆ is a repeater signal.  It is placed after a word to signal that the word (and sometimes a phrase) should be repeated.  In Thai saying a word twice has a few different functions such as adding emphasis or changing the grammatical form of a word.

Have a Great New Year!

Hopefully you now know how to say Happy New Year in Thai and wish all of your Thai friends health and happiness for the New Year.  So now it’s time for us to say สวัสดีปีใหม่ (sawad dee ppee mai) Happy New Year and ขอให้เก่งภาษาไทย (kor hai geng phaasaa thai) I wish for you to speak great Thai!