How to Say For in Thai

How to say FOR in Thai

When I first wanted to know the word for “for” in Thai,  my Lonely Planet Phrasebook said สำหรับ or samrap.  While สำหรับ does mean “for,” in many cases, it is not the best answer. 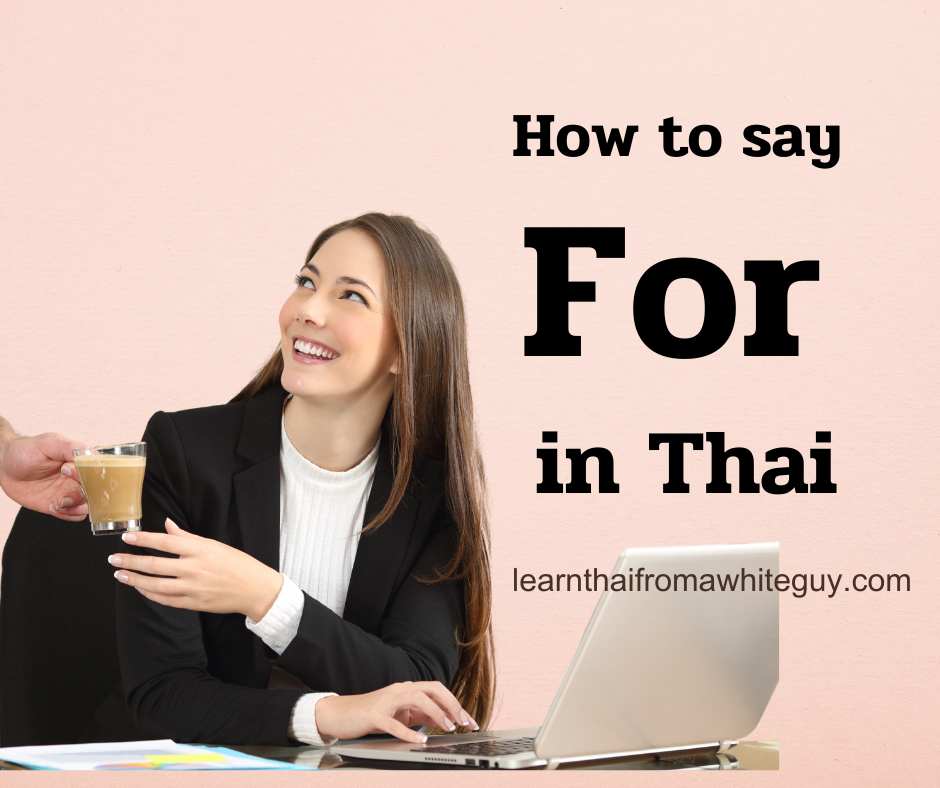 There are 3 main ways to say “for” in Thai.   Luckily, there is often some overlap with their English equivalents, but it may take a bit to get used to which word you’ll need to use in each situation.  I’ll include some key examples in this post so you can get an idea which is which.

The first version of “for” that we will look at is “ สำหรับ” (sam-rap).

This version of “for” is often used when talking about what the purpose of a thing is or what it’s intended use is. Let’s look at the sentence “games for kids”.  The “for” in this sentence essentially means “intended to be used by”.  This is how the word สำหรับ (sam-rap) is used in Thai.

สำหรับ can also be attached to a verb phrase.  This is similar to how we would say a phrase like “a pen for ipad.”  The “for” means something like “for the purpose of.”

The usage is just sap-rap สำหรับ  + the verb:

Here are some more examples:

For in Thai  (for the benefit of)

This word is used for all the organizations and foundations.  School for the blind, for the people, etc.

เพื่อ (phuea) – for the benefit/purpose of someone/something; in order to

For in Thai (on behalf of/ in case of)

The third version of “for” that we will look at is เผื่อ (phuea).  This can mean something similar to the English “in case of something” or “on behalf of”

While in these very commonly used examples, เผื่อ functions as “on behalf of”

These are often used when you are telling someone you are going to do something…go eat, go out, go on a trip, etc and the person you are speaking to says this to mean something like “do it/one for me too!”

English example, you are heading out to the pub, but your friend is sick or has to stay home in work – they might say ‘Drink one for me!”

These 2 words take different tones because of 2 factors: their initial consonant AND the tone mark.

While you need to know the 4 tone marks in order to determine the tone of a word or syllable in Thai, you ALSO need to know the CONSONANT CLASS of the word as each of the 3 classes has slightly different tone rules that you’ll need to master in order to learn to speak Thai fluently.

It does take a bit of work, but you can learn to read and speak Thai.  Sign up below and we’ll send you some free lessons from our Learn Thai Inner Circle program.

For in Thai: Bonus Round ให้

ให้ (hai) is a very versatile word which has lots of different uses.  Depending on the sentence it can mean: to give; to allow; to make someone do something; and it can also be used as the preposition, “for.”   If this sounds intimidating, try to explain to a non-native English speaker what “get” means.

Sentences Where “For” Isn’t Used in Thai

Even though there are lots of ways to say “for” in Thai, there are a number of sentences where “for” is not used.

Below are some situations where we use “for” in English but not in Thai.

Situation 1: When talking about how long something has been or will be done for.

Even though in English we need to use the word “for” in these sentences, in Thai there is no equivalent version of “for” used.

Situation 2: When thanking someone or saying sorry for doing something.

Once again, there is no version of “for” used in these Thai sentences.

We understand that trying to memorize all of this will be impossible for most people.  Just bookmark this page and come back to reference it as needed.   Whenever you run into a situation where you want to say something and you don’t know how, make a note somewhere and look it up, send us a message, or ask on a app like HiNative.