How to Say Who in Thai

Here’s How to Say Who in Thai

“Who” is one of the first question words you should learn in Thai (or any) language because you’ll need to use this word every day starting from day 1.   Below, we’ll show you a few common phrases that use the word who, we’ll also break down the spelling in Thai so you can get an idea how the Thai alphabet works.

The Thai word for Who is: 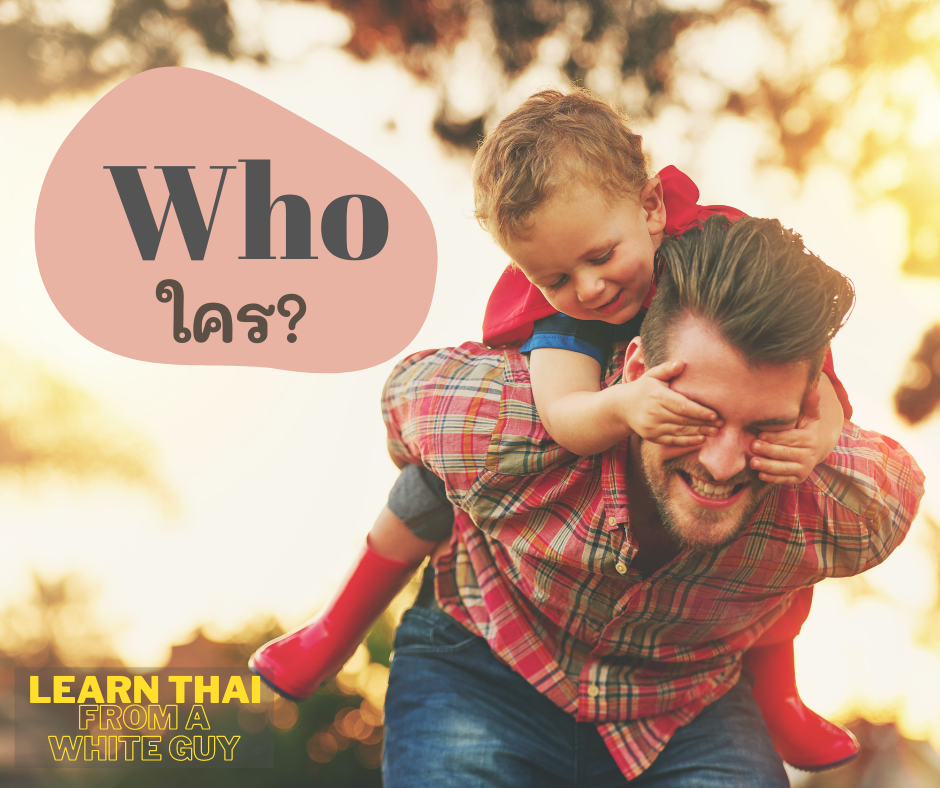 How to Spell Who in Thai:

Even if you can’t read the Thai script yet, it might be interesting to break this Thai word down to see how it works.

The letter in the middle is an aspirated “K” sound.  Aspirated just means that there will be a strong blast of air when you pronounce this Thai letter.  It’s just like the K sound in “kite” “keep” or “kill.”

Click on any of the following Thai words to hear this letter in action.  Don’t worry about the rest of the word right now.  Just listen for the first consonant K sound.

The 2nd letter which is all the way to the right in this word is the Thai “R” sound.  In Thai, just like in English, you’ll find that sometimes, 2 consonants can share the same vowel sound.  *The Thai R (ร) is trilled, but in informal daily conversation, most people do not pronounce the full trill so don’t worry if you can’t say it perfectly yet.

In the word for “who,” the K and the R come together to create a คร- KR- sound.   This is called a “consonant cluster” and you already know how to say it even if you’ve never heard that term before.  Here are some examples of consonant clusters in English.  I’ll BOLD the clustered letters to make it easier to pick them out.

The symbol on the left of ใคร (krai) is the vowel.  This vowel sound makes an “ai” or “eye” sound.  Click on the following Thai word to hear how it’s pronounced: ใอ

Here are some basic Thai words which use the ใอ (ai) vowel:

Example Sentences with the Thai Word “Who”

How to Say “Who” in Formal and Informal Thai

Like in English, asking someone who they are should be done in a polite way to avoid sounding rude. If a Thai person asks this question they will usually add a male or female polite particle.

An informal, sometimes impolite particle can also be used depending on certain factors like your relationship with the person you are asking.

Formal Thai Phrases with Who

You should note that these polite particles don’t always sound the same when you hear them spoken in public. Often, the R (ร) in “Khrap” is dropped and it ends up being pronounced as “Khap” ( คับ).

Informal Thai Phrases with Who

The particle “na” ( นะ) can be added to the sentence to make the question sound softer. Who are you? –

This might be used in a situation where two possible love interests have bumped into each other. Na is not impolite but should not be used in very formal circumstances.

Lastly, the impolite particle can be used at the end of the sentence: wa ( วะ)

Imagine a man picks up the telephone of his girlfriend and another man is on the line. This might cause him to be jealous (He’s the jealous type), and so the sentence may not sound very polite at all. The man may simply ask  – “Krai wa?” ( ใคร วะ) or “Krai phoud wa?” ( ใคร พูด วะ). In English this would translate as something like “Who the hell is this?” or “Who the hell is speaking?”

Be very careful with the WA ( วะ) particle.   If you use it with someone you don’t know it is very aggressive and you could get yourself into trouble.  Many Thai people will use it amongst their close friends so if you stick around long enough you are going to hear this particle.  I don’t recommend using it until you have gotten a bit deeper into Thai language.

WHO in Thai is strictly a question word.

All together, that spells: ใคร or WHO in Thai.

Filed Under: Beginner, How to speak Thai, Sentences Tagged With: how to say in thai